A couple of weeks ago I had the pleasure of leading a week of the Reading Group for our Institute of Transnational and Spatial History. They had been discussing how they had not had any engagement with writing about premodern history, and my week was their second go at changing that. This was great for me: I like working with many of my modernist colleagues, and it is not always easy to find frameworks in which we can actually talk without just talking at cross-purposes intellectually. Indeed, when the Institute was first founded, some colleagues were not sure that modernists and premodernists could talk to each other in the context of transnational histories, because many of the touch points for them were triggered by the decline of the nation state in particular forms that hadn’t emerged in our period. The interculturality of premodernity was categorically ‘something else’. Anyway, things have moved on. 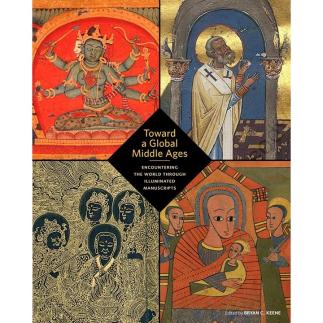 The book we discussed was the lovely recent volume edited by Bryan Keene, Toward a Global Middle Ages. The idea of a ‘global Middle Ages’ is, as I have discussed before, suddenly very popular and a little controversial. Books like this, alongside that great recent Past & Present volume and other publications, help to express the ‘moment’. Its essays use various aspects of manuscript production and exchange as a way to break out of nationalist or parochial historiographies. Case studies explore how ideas and objects regularly cut across the real and imaginative boundaries that later scholars imposed on their orderings of the past. And the emphasis is on case studies that are suggestive of wider patterns or which subvert expectations. Like much about the global medieval, there is much rhetorical power in the ‘Argument of Surprise’, when we are surprised at how interconnected premodern worlds were. And this is fine: it is a book that simultaneously has some things to say while seeking a wide audience.

There are problems with terminology, as Keene well recognised in his introduction. Some people do not like to describe the Middle Ages as ‘global’ because it wasn’t ‘globalised’ and we often miss large areas out. Maybe ‘hemispheric’ is better as a label. But also there are people who don’t like ‘Middle Ages’ applied to non-European contexts, even as an empty chronological shorthand. Not that there are necessarily obvious alternatives: few acts of labelling are ever value-free. The modernists, by the way, found this familiar. ‘Ah, you worry about labels all the time too!’ One late modernist told us how he appreciated some of the models of global histories because, in his field, there had been a lot of anxiety about critiquing ‘the occident’ that had a) often involved some rather fluffy definitions and b) not often involved creative strategies to liberate historians from the baggage and models so that they could move forward.

We agreed that there is a point at which arguing about the labels doesn’t actually get people very far. What’s under the hood matters more. Here, actually, the group struggled a little with Toward a Global Middle Ages. If you wanted a book of hardcore theory and depth-beyond-depth, this isn’t the book for you. The clue is in the use of the word ‘toward’ of course: it is a (significant) gesture in the direction of a way of thinking that is still being worked out, designed for a relatively broad audience. One colleague suggested the end was result was ‘more flower arranging than botany’. And maybe that is okay: not everything has to be religiously programmatic and exclude everything else that doesn’t fit.

An exciting aspect of the ‘gesture’ is the potential to start conversations. One of the modernists present is a historian of China and has enjoyed finding ways to talk to colleagues who work on other areas. So he enjoyed reading a book that purposefully juxtaposed similarly themed essays by scholars in ways that were suggestive of connections between China, India, the Arab world, and so on. And these conversations need to involve historians from these places too, of course, otherwise the gesture becomes a little hollow.

One of the medievalists present also noted that such enterprises are useful on more local scales, as scholars working on archaeology, law, religion, economics and politics, even if interested in the same cities, can accidentally contrive to ignore each other. Again, the banner of ‘global histories’ can helped people to have interact with each. (Obviously there’s nothing to stop them without that banner too). One of the modernists appreciated this, because in his experience many of the interactions that make global history meaningful occur at a local level, be it at markets, universities or wherever. Indeed, there we were, with people from three continents/ six countries, in a room – not a ‘global conversation’ in the sense that it happened everywhere, but with a global context and with networks that had ultimately led everyone to that shared space, reading a book together about worlds past.

A commonly raised points about global histories, of course, is that they must be collaborative. One cannot master all the languages or learn everything about everywhere. This will mean more books like Toward a Global Middle Ages if the field is to develop. They will bring their own questions: no one present, for instance, knew how representative any of the case studies present really were. The long(ish) bibliography at the book will get some use afterwards.

One also hopes that collaboration doesn’t mean the responsibility towards engagement is endlessly deferred. I am never going to master Classical Chinese, sure, but I would find it strange not to give it a go if I ever wanted to say anything using the sources, rather than simply to rely on what people said in languages I did understand. Finding helpful sinologists shouldn’t mean I shouldn’t try, should it? Collaboration must mean more than turning up to do your thing. We can hope for polyphony from the orchestra, but it does help if a few people have at least some working idea of what is going on in the other sections. This is not just a challenge of global history of course. I have sat through enough meetings of many sorts.

We ended with an argument. To what extent were projects like this the future? Some people found the book at times strived to say so much it sometimes said very little – a danger prefigured by some of the critical comments in the book’s own Sebastian Conrad-citing conclusion. Indeed, sometimes moments like the present ‘global’ mood in medieval studies make and attract a lot of noise, while there is still a lot to be said in other fields, with more voices to be rescued, more documents unearthed, and new political fights to be had. It was countered that global histories might actually be the future, because everyone in the humanities are going to have to work together somehow to survive harsh funding environments. And that may be the case in some places, but there is never a one-size-fits-all solution. We also seek collaboration with scientists, build databases, and some people even survive and thrive by doing good work(!).

By that point, however, we had run out of time. I suppose there wasn’t really a ‘take home point’, because it was a relaxed lunchtime reading group. But rest assured there will be more talk.